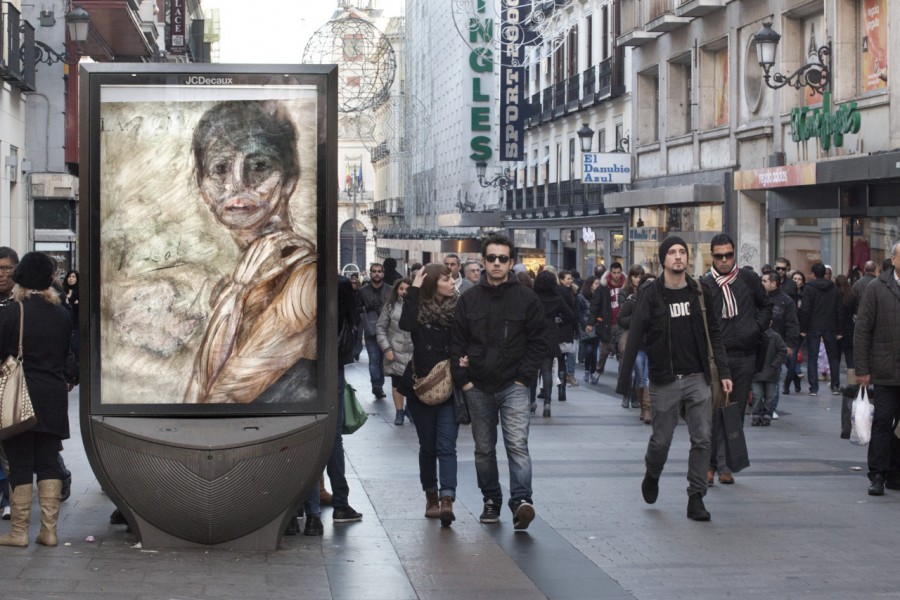 DEPERSONALIZATION AND DEHUMANIZATION IN THE ROTTEN WORLD OF ADVERTISEMENT 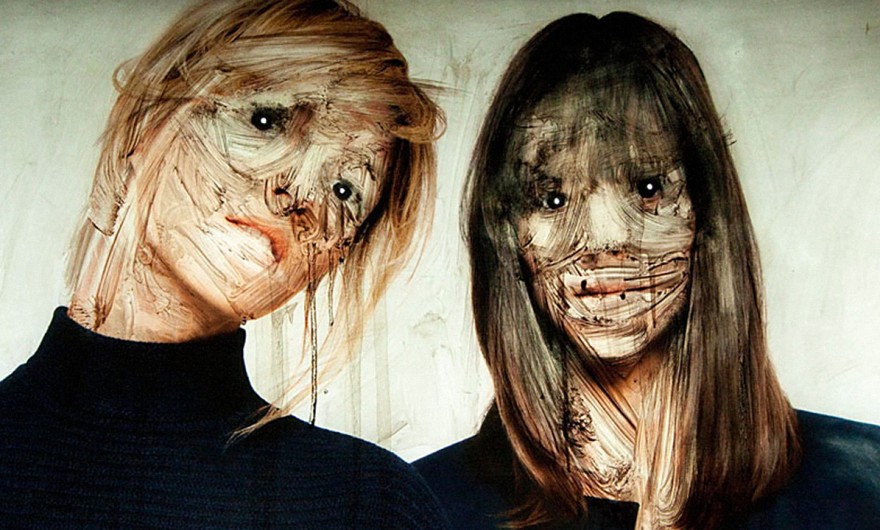 Advertisements pitch an ideal of singularity that trick the consumer into thinking such ideal is viable. However, the apparatuses employed by the industry depersonalize to create a rigid net of sameness that allow producers to satisfy every shade of that uniformity and thus ensure profit. Artist Vermibus intervenes existing advertisements to comment on prevalence of depersonalization in the fashion industry. Vermibus violently distorts the preexisting manicured images to show that dehumanization is the only hope for singularity in this mechanically reproduced world.

We think about fashion even when we attempt to neglect it: the world becomes a catwalk where participation is no longer optional.

The fashion industry has penetrated our ideas of how we present our respective individual and how our everyday audience absorbs it. Rejecting trends and fashions involves a conscious awareness of it and a deliberate method of presentation that will advocate the repulsion this industry triggers.

Presentation or the embodiment of personality through consumerism seem to have the potential to capture and exhibit our interests. We expect this embodiment to happen because we have been taught by mass culture what qualities will personalize and single us out; but because this singularity is mechanically reproduced, it fails to manifest itself and becomes everything but. 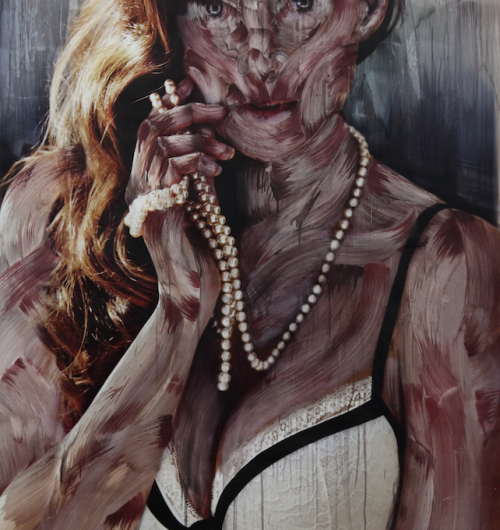 Calculated devices are exercised by mass culture and advertising that homogenize and standardize individuals to abolish the possibility of singularity at all costs. This allows to broaden the consumer demographic and thus make sure everybody is buying: there is a product for everyone out there because consumers absorb and embody all the ideas pitched by advertisements. Singularity translates to someone whose wants and needs are not satisfied with the consumer goods offered by the market. Standardization is in the market’s best interest because it will systematically ensure consumption and profit.

It would be reductive to appoint all personality traits to those advocated by advertisements but the extent of their influence is undeniable and alarming. The substance in a every person is constituted by numerous factors, but at least the way in which people present and embody their substance adjusts to this scheme and influence to a significant extent. Advertisements are mechanically reproduced and can be found literally everywhere: in historical monuments, inside our screens and in between train stops.

An important apparatus for this system is the standardization of beauty, where a person needs to have x, y, and z characteristics to advocate the ideal of beauty advertisements want to deliver. X, y and z are variables that change with time and depending on what the culture industry manifests as beautiful. Models are vehicles for this standardization of beauty and all drown in sameness. They all look the same with exceptions of eye, skin and hair color, they are all fabricated by the same mold. The people inside the world of advertisement seem to promote singularity, but are actually encapsulated by a two dimensional, mechanically reproduced and prefabricated persona, built to satisfy board members and their agendas. The singularity that is advertised is promised through consumption, even though it is false. 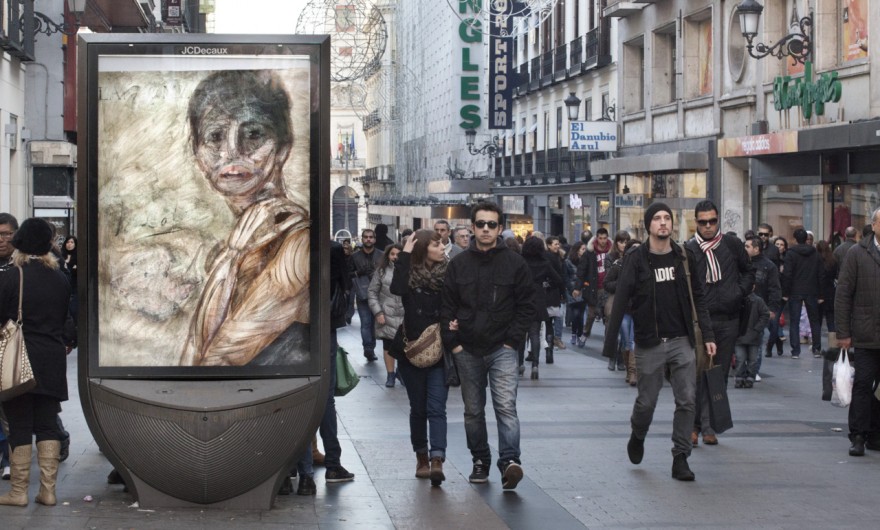 Artist Vermibus toys with this homogenized advertising world in his practice to actively comment on its concerning nature. Vermibus utilizes existing advertisements and then uses solvent and brushes to distort the image. Once the image has been intervened, the fashion advertisement is later reintroduced to its original context in its corresponding public setting. The technique employed by Vermibus can be read as an inverse gestural painting that mutates a plethora of sameness. The artist asserts that advertisements mask a person to substitute his or her identity for the one of the brand. When intervened, the advertisements of sanitized bodies adopt an aura of decay and resemble ghostly creatures. The artist insists that this mummy-esque aesthetic has more presence and that it enhances the potential of singularity. This statement is very powerful because it demonstrates that perfection is so standardized and mechanically reproduced that it has lost all its weight and significance. The promise of its existence everywhere allows for it to be taken as a light given where the only successful way of standing out is by alluding to death and shadows. Decay has become the antidote for singularity in the arena of flat spaces and brand names because it is the only possibility for differentia.

Verimus takes a reflexive and critical stance on this rotten world of uniformity and comments on its manipulative and dehumanizing agenda. He claims that models, the main vehicles for fashion advertisements, are depersonalized so that the one of the brand replaces their identity. This statement is ironic because many of these brands use the same models for their campaigns and are thus encouraging an even more limited and unvaried set of identities. The vehicles and apparatuses for advertisements are so unvaried and that is evidence for the lack of actual choices and possibilities that consumers actually have.

Vermibus rescues the depersonalized people inside advertisements by attacking them through a process of dehumanization. His images are no longer the banal and ephemeral background, but rather active criticisms of the images that exist everywhere over and over again. The artist invites the viewer to develop a critical perspective about this matter by challenging the expected horizon of billboards and commercials. 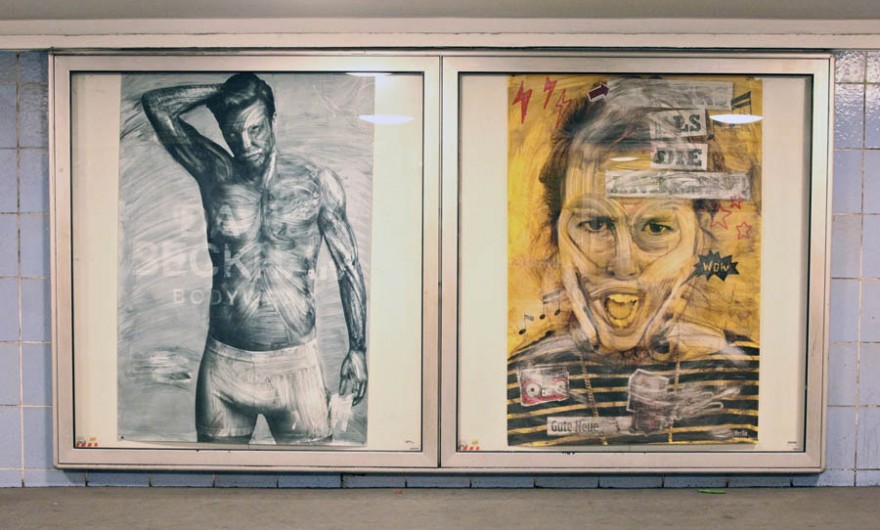 David Bowie Vans edition features four different designs David Bowie Vans are a reality with four different models inspired by his albums. The exact release date has not yet been confirmed but fans have already shown their excitement on the Internet. These sneakers seem to have been in the making for almost a year and […]
by David Zuriaga

Gola Hundun: The creative chaos in art and nature

The artistic universe of Gola Hundun: when nature creates art Text by Mariana Gaona – Translation by Briana Prieto Fuentes Gola Hundun’s 2016 marked his artistic career. When walking through the streets of San Pedro Macoris, a town in the Dominican Republic, a building captured his attention; it was an abandoned masonic temple that, in […]
by Karla Corazón

The most anticipated sneakers of 2020

The women of Idalia Candelas are free, autonomous and enjoy their own company For many women being single is one of the best experiences in life and Idalia Candelas confirms it with her illustrations. The series of drawings make up her book A solas (Alone). A publication that seeks to demystify the false beliefs of […]
by Fernando Huacuz

Lettering as a Lifestyle with IT’S A LIVING

Interview with one of the great promises of lettering At All City Canvas we had the opportunity to conduct an interview with lettering artist IT’S A LIVING regarding his participation in the All City Canvas “Global Series x Parque la Ruina” held in Hermosillo, Sonora. Where he made an incomparable piece entitled “To Dream”. Ricardo […]
by Karla Corazón

Mitchie Brusco, the first skater to achieve a 1260° flip

At the X Games in Minneapolis, Mitchie Brusco did the first 1260° flip Mitchie Brusco is an American professional skater to make the first 1260° flip on his skateboard. This feat was performed during his participation in this year’s X Games in Minneapolis. This feat in sports marks an important benchmark, similar to Tony Hawk’s […]
by David Zuriaga

FROM THE COURT TO THE FASHION WORLD: 3 ODDITIES OF THE NIKE AIR JORDAN

It’s impossible to talk about basketball without thinking about the one who, decades later, is still considered the best player in the history of the sport, Michael Jordan, because thanks to his talent, he dominated an entire era of the NBA becoming one of its main role models. Backed by the reknown Nike brand and […]
by Karla Mariana Huerta

SNOOP DOGG IN CALL OF DUTY: WARZONE WITH MARIJUANA PLANT

As part of his collaborations, Snoop Dogg comes to Warzone Snoop Dogg comes to Warzone as a playable character with special gestures and weapons to conquer the battle royale. This collaboration has all the gangster essence of rap with the rapper’s classic touch of marijuana. Call of Duty Warzone has been characterized by bringing a […]
by Karla Mariana Huerta

ALL CITY SHARKS: FROM THE STREETS TO THE METAVERSE, A NEW DAO

Meet the All City Sharks and become a part of the new DAO, starting with the arrival of street art to Web3 and the Metaverse with these NFTs All City Canvas is pleased to present this new project called All City Sharks, which will bridge real life urban art to Web 3 and the metaverse. […]
by Fernando Huacuz

To overcome the summer heat, hit the beach or the supermarket, All City Canvas launched the ACC flip flops for your ultimate comfort Through its online store 555-8888, All City Canvas launched ACC flip flops, the new collection of super basic and extremely comfortable flip flops. And you can’t deny it, we know that both […]
by Karla Mariana Huerta
STAY UPDATED
Subscribe to our Newsletter and receive the latest news from street culture in your inbox.