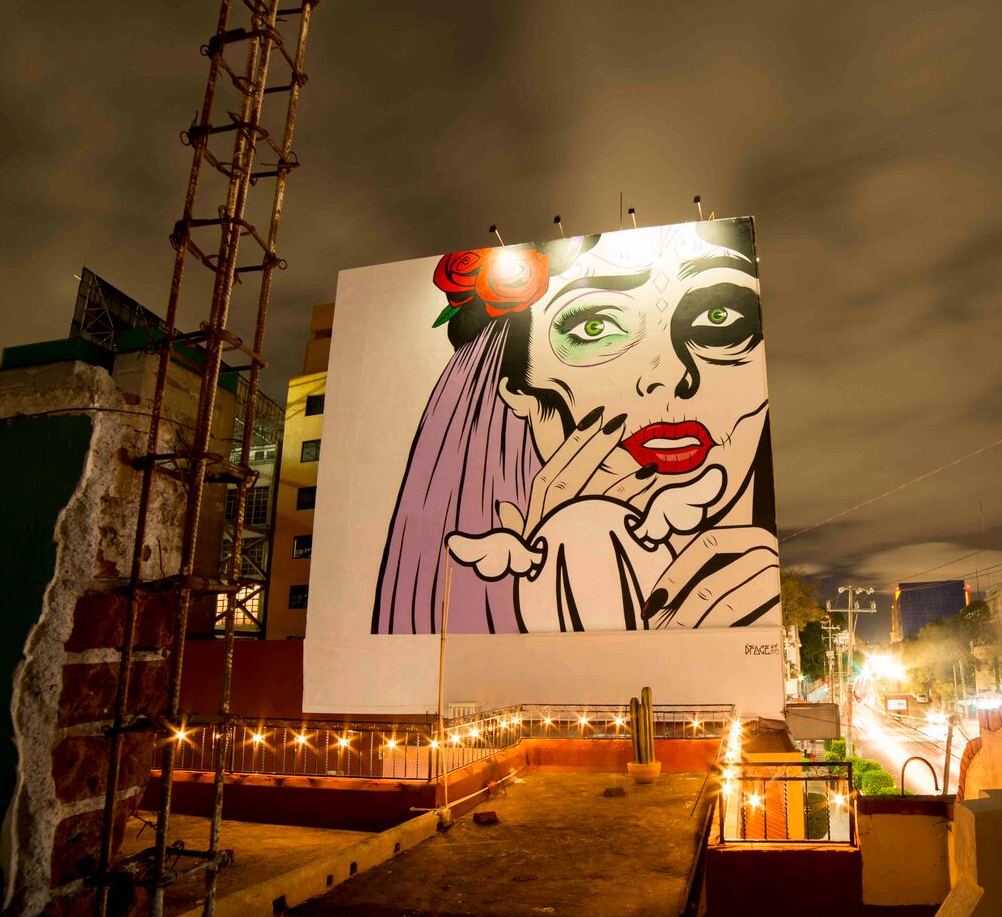 Given that the high and low arts have merged, a point of distinction between aesthetic experience and late capitalist agenda is extinct. Aesthetics have never been free from institutions that charge them. Art has always served external agencies, even during Modernism when art was said to serve itself, its discourse still belonged to social agendas.

The Avant-garde seemed to contrast the exploitation of aesthetics observed during Nazi Germany, religious iconography and numerous other instances. But as soon as art broke from other institutional forces, it bounced back to become a puppet of capitalism reconciled with mass culture. The fine arts and the world of advertising had merged most evidently with the rise of Pop art even though other artists like Jasper Johns and Robert Rauschenberg are fair precedents. Pop was factory. Pop was repetition. Pop had lost the aura Walter Benjamin mourns. But this was a conscious death that responded to the Culture Industry.

The Culture Industry is interested in reducing human beings to consumers and employees to satisfy a Capitalist agenda. This reduction relies on calculated apparatuses that adhere humans to a pre-imposed fallacy that seeks to perpetuate Monopolized Capitalism and its adjacent rigid class structures. The aim of the Culture Industry is to make human beings vehicles that will guarantee and maximize profit in an unvaried, circular timeline. Human beings are forced into a formula that enables the inflexible assignment of roles the industry requires for its success; mainly those of consumers. The ultimate Capitalist goal is to make every single member of a system a consumer.

Although Pop critiqued the Culture Industry and how every individual is manipulated to be an active consumer, their critique stayed inside gallery spaces. Pop artists like Warhol and Lichtenstein had an obvious reflexive stance towards this matter. But their critique only orbited inside gallery spaces and art institutions. Gallery and museum walls limit the public and adhere the artworks to the rigid class structures endorsed by capitalism. The public becomes limited to the upper part of the social pyramid; Pop circulated in walls of wealth and was exchanged between very fat wallets. Thus, the critique that happened only reached the wealthy few and ignored the masses. Pop was reflexive, but the object they were critiquing became their consumer, and their work was yet another product that reinforced the rigid class structures endorsed by late capitalism.

British artist D*Face has an atmospheric shift in the critique of the late capitalist high performance culture we are embedded in. The capitalist and consumer critique pitched by D*Face is for the masses. Although the artist appropriates the aesthetic of Pop artists Andy Warhol and Roy Lichtenstein with a sinister and grotesque twist, I think that the most significant part of this critique is that the message does not endorse the capitalist class structures echoed in gallery spaces and museums. The contemporary equivalent to the elitist circles of Pop would be the art by Jeff Koons, work that is so expensive that only a small sector of the population will be able to see it and an even smaller one would be able to buy it. Street art takes a stance on this issue.

D*Face’s mural in Mexico City “Catrina” gives its message to the passerby. “Catrina” was inspired by Mexican culture and how it celebrates death instead of going through lengthy periods of mourning. This comparison seems more relevant than ever given that after the Paris attacks mourning seems to be present in the lives of people who had no direct connection with the deaths whatsoever. Mourning the deaths of those who died in the Paris attack is said to demonstrate support, but this makes me skeptical. Many corporations are utilizing the French flag as a vehicle to profit from the tragedy. How many corporations attached the French flag o their products to trick us into buying more by showing an awareness of the terrorist attacks? How many people on our social media adhere the French flag to demonstrate a pseudo social awareness and a pseudo sympathy when making their profile picture tricolor has more to do with narcissism and investment in social capital that will later translate into likes? It is unsettling to think that the attacks that took place in Beirut and Baghdad did not have as much media coverage as Paris because these two would not have the potential to yield as much profit.

Late capitalism commodifies tragedies through the aesthetic realm to expand their market even when there is a global sob.

The US company Ben & Jerry’s announced its desire to make CBD ice cream as soon as it is fully legalized In May of this year, Ben & Jerry’s made public their intention to create a CBD ice cream! They said they “can’t wait to get into the latest food trend with cannabidiol.” It should […]
by Karla Mariana Huerta

Pokémon, Supreme, and LEGO against racism

Black 3.0 is a black acrylic paint that absorbs between 98 and 99% of visible light; everyone can buy it, except Anish Kapoor Black acrylic paint is super black thanks to Stuart Semple and Black 3.0. You apply it with the basic tools that we know: brush or paintbrush, spray or roller. Notedly, the invention […]
by Karla Mariana Huerta

The Arizona beverage brand could surprise us very soon… Are you ready? A Wall Street Journal report disclosed that Arizona could collaborate with Dixie Brands Inc. in a new line of products made from CBD and THC. The collaboration will be interesting; through its affiliate, Herbal Enterprises, LLC, Arizona will lead the conceptual design of […]
by Fernando Huacuz

Mitchie Brusco, the first skater to achieve a 1260° flip

At the X Games in Minneapolis, Mitchie Brusco did the first 1260° flip Mitchie Brusco is an American professional skater to make the first 1260° flip on his skateboard. This feat was performed during his participation in this year’s X Games in Minneapolis. This feat in sports marks an important benchmark, similar to Tony Hawk’s […]
by David Zuriaga

A virtual tour of Vhils’ work at HOCA and on the streets of Hong Kong Text by Monica Vazquez – Translation by Briana Prieto Fuentes Identity and life in the urban context are the topics of the exhibition Debris at Hong Kong Contemporary Art (HOCA), by Alexandre Farto, better known as Vhils. The exhibition ran […]
by Karla Corazón

Four installations were exhibited in Coachella 2017 Text by Cristina Ochoa Photos by Infobae and loqueva Translation by Briana Prieto F. and Paula Villanueva Radiohead interrupted their performance twice; Beyoncé canceled and Lady Gaga sang instead, but Coachella is more than just a music festival; beyond the famous lineup that it manages, it is also […]
by Karla Corazón